Development of the gastrointestinal tract begins early in embryonic formation. Around Day 21 of development, brachial arches 1 and 11 are present. The paired maxillary and mandibular processes of brachial arch 1 are distinct by Day 23, when the former grow forward forming the mandible merging at the symphysis and the latter form the majority of the maxilla, incisive and palatal bones of the hard palate. By Day 25 the thickening of the oral epithelium forms 2 U-shaped structures that eventually become the upper and lower dental lamina of the dental arches which house the teeth.

The maxillary processes and nasal processes form the palate. The area of the incisal bone (premaxilla) is formed by the nasal process, and until day 27 the nasal and oral cavity communicate. Cleft palates are commonly formed at this stage, between days 24 – 27 of gestation and may be either primary or secondary. A primary cleft palate occurs when the premaxilla, the bone which houses the incisor teeth, does not form properly. A secondary cleft palate occurs either uni- or bi-laterally when the palate does not fuse either in the midline or on one or both sides with the maxilla and all of the upper teeth other than the incisors. This can be genetic or development, and may be induced by the administration of corticosteroids at this age.

Regulation of bone growth is a complex phenomenon dependent on genetic factors, hormonal factors, development of the teeth and different muscles activities (cheek, lips, tongue). Muscular and other soft tissue structures covering the jaw bones play a role in craniofacial growth. Muscles of the cheeks, the tongue, lip pressure, tooth interdigitation acts as lock between the upper and lower jaws, and as dogs keep their jaws closed at rest, all of these factors play a significant role in jaw growth and the eventual malocclusion if it is to occur. In 1941, Stockard crossbred several breeds of dogs from different skull shapes, including dolichocephalic, mesocephalic and brachycephalic. By the F2 crosses there was a wide variety of skull shapes, from Class 2 to Class 3, and he found that as the muzzle became shorter, the teeth were not correspondingly reduced in size, resulting in crowding, rotation and misalignment occlusion, as the genes for the mesocephalic mandible were dominant in all the crossbreds. He also found that the ‘undershot’ jaw of the ‘bulldog’ type breed was due to chondrodystrophy of the cranium rather than an overgrowth of the mandible.

Growth in length of the mandible occurs in the rostral portion of the jaw until about 50 days, when grow changes to almost completely being derived from bone formation on the caudal border of the mandible. Dogs from 12 weeks of age show no growth of the mandible between the incisors and the first molar tooth, and no growth in length in the premolar region between 13 and 28 weeks of age. In the maxilla, length occurs via two sutures, the incisivo-maxillary suture rostrally and the palato-maxillary suture caudally, where the total length in adults is contributed 30%, 37% and 33% by the premaxillary, maxillary and palatal bones respectively. Growth in width occurs at the intermaxillary suture.

Malocclusions result from both genetic and developmental factors. No technique or test is available in veterinary dentistry to rule out with certainty skeletal malocclusions. In humans, it is known that in order to modify inherited jaw growth, the functional disturbance must be of sufficient duration, generally greater than six hours. In veterinary patients, the functional disturbance most likely to induce malocclusions is persistent deciduous teeth as they modify the normal functional environment during eruption of the teeth. And persistent deciduous teeth are highly likely an inherited disorder. Another common occlusal malocclusion is a dental interlock, such as mandibular canine teeth being caught caudal to maxillary canines. It is unlikely that a puppy could have a normal inherited growth pattern and expect extraction of these teeth as a means of expressing genetic potential to result in normal occlusal length and pattern.

There are three basic skull and jaw types.

Dolichocephalic are dogs such as the Greyhound, Dobermann, Saluki and Borzoi, with a long, narrow face and a scissor bite, called ‘normal’ occlusion according to normal medical literature.

Brachycephalics are dogs such as the Boxer, Pug, Shih Tzu and Bulldog, with a short, broad face and a Class 3 (reverse scissor bite) malocclusion according to normal medical terminology and Persian and Exotic breed cats with a squashed in face.

Mesaticephalics are dogs such as the German Shepherd, Labrador Retriever, Spaniels, Terriers and Hounds, and most cats, with a jaw and face between the previous two and a scissor or normal occlusion.

The normal head type in the wolf or feral dogs is mesaticephalic. Of great importance is the symmetry of the head, the incisor relationship, the canine interlock and the number of teeth. The malocclusions are described as they relate to the normal occlusion, which has been classified as Class 0.

Lateral and rostral view of the scissor bite in a German Shepherd dog.

Class 1. Normal occlusion with one or more misplaced or rotated teeth.

A commonly seen condition where one or more maxillary incisors are displaced lingual to the mandibular incisors and the rest of the teeth occlude normally. Generally results from retained deciduous teeth, therefore considered inherited.

The above gallery shows a photograph of a dog with an anterior crossbite, which demonstrates displacement of the maxillary right and left 1st and 2nd incisors. The 1st incisors are lingual to the mandibular teeth and the 2nd incisors are level. A photograph of  orthodontic correction of anterior cross bite involving the incisor teeth using a palatal expansion device. The appliance is attached to the canine teeth and placed palatal to the incisors, so when the screw in turned, the rostral portion of the appliance moves forwards and tips the maxillary incisors into a normal scissor occlusion is also included.

Photgraph of a dog with crowded and rotated maxillary premolar teeth. Recommended treatment is extraction of the rotated or misplaced teeth.

Maxillary premolar or molar tooth / teeth are positioned lingual to mandibular counterparts. Seen in some dolichocephalic breeds such as the Borzoi, presumed to be an inherited disorder. 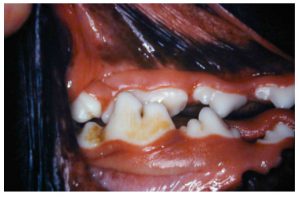 Photograph of a dog with a posterior crossbite, which demonstrates the lingual occlusion of the maxillary 4th premolar tooth adjacent to the mandibular 1st molar tooth. Treatment depends on whether the teeth are contacting each other: if there is no trauma – treatment involves monitoring the patient; if there is trauma – recommended treatment is either crown reduction and direct pulp capping (where necessary) or extraction, as it is extremely difficult to othodontically move the malpositioned teeth into a normal occlusion.

The mandibular canine teeth are displaced lingually or the mandible is narrow compared to normal occlusion and the maxilla. In both situations the cusps may occlude into the hard palate resulting in inflammation, ulceration or at worst an oro-nasal fistula. His is commonly seen in BullTerrier and Staffordshire Bull Terrier breeds, as it was desirable to have a narrow mandible and as such breeders selected for such, often resulting in malposition of the mandibular canine teeth and trauma to the hard palate. Therefore this is considered genetic in origin.

The gallery above shows a photograph of a dog with a lingually displaced mandibular canine which is traumatizing the hard palate mucosa between the maxillary 3rd incisor and canine teeth. Orthodontic correction of a lingually displaced mandibular canine tooth using a palatal incline plate. The metal appliance is attached to the maxillary canine teeth bilaterally and an angled incline is positioned in the diastema between the 3rd incisor and canine so that the mandibular canine is forced laterally each time the patient closes its mouth by contact of the tip of the canine tooth along the incline. Treatment in a young dog, 10 – 18 months of age, usually results in a normal occlusion within 2 months.

Maxillary canine teeth malpositioned rostrally can be secondary to eruption displacement secondary to persistent deciduous teeth in any breed but commonly observed in toy and small breed dogs and Persian cats. It is also considered to be dominant gene – genetic condition frequently seen in Shetland Sheepdog breed dogs.

The gallery above shows a photograph demonstrating a rostral displaced maxillary left canine tooth. Then orthodontic correction of a rostrally displaced maxillary canine tooth by elastic power chain and orthodontic brackets. The brackets are cemented to the buccal surface of the canine tooth and the 4th premolar and 1st molar teeth, the chain is placed under tension, which allows the canine to be tipped into normal occlusion. Treatment is dependent of having a solid anchor point and a periodontally healthy canine tooth and may take 4-6 months depending on the breed of dog or cat.

Commonly the maxilla is elongated compared to the mandible, where the maxilla can be protruding or the mandible shortened. The maxillary incisors are positioned rostral to the mandibular incisors and the mandibular premolars / molars are positioned caudal to the normal relationship. Often referred to as ‘overshot’ or ‘ parrot mouth’. Is a genetic condition on the Rottweiler breed, but can be developmental caused by deciduous canine teeth interlocking into the hard palate.

Above gallery shows a brachygnathic, Class 2 bite and occlusion: lateral view of skull with diagrams representing the lip shapes. Courtesy of Dr Peter Emily. A photograph demonstrating a Class 2 malocclusion in a 8 week old puppy dog which shows the deciduous mandibular canine teeth caudal to the maxillary canine teeth. It is highly likely that this dog will have a permanent Class 2 malocclusion, especially if it is a Rottweiler breed dog.

And, a photograph demonstrating the lateral view of the Class 2 malocclusion in an adult Rottweiler dog. Class 2 mandibular brachygnathicism. Treatment involves either orthodontic correction to move the mandibular teeth laterally using an acrylic incline plate, extraction of the canine teeth; or crown reduction and direct pulp capping (as has been performed in this dog – note the shortening of the mandibular left canine tooth).

This is considered to be the ‘normal bite’ for the breeds such as the Boxer, Shih Tzu and Bulldog, but is due to breeder interference and breeding for head type rather than natural variation. A ‘level bite’ is a form of class 3 malocclusion, which is commonly seen in the Old English Sheepdog breed. The maxillary incisors are positioned caudal to the mandibular incisors and the mandibular premolars / molars are rostral (mesial) to the normal relationship.

The above gallery shows prognathic, Class 3 bite and occlusion: lateral view of skull with diagrams representing the lip shapes. Courtesy of Dr Peter Emily. A photograph demonstrating lateral view of the Class 3 prognathic occlusion. Usually treatment is not required other than a good homecare regime to reduce plaque acuulation.